Golden Time is an anime adaptation of the light novel series of the same name. J.C.Staff, whon have animated many brilliant shows such as Food Wars, The Pet Girl of Sakurasou, and Selector Infected WIXOSS, were responsible for this adaptation. The light novel series was written by Yuyuko Takemiya, who is best known for writing the Toradora! light novel series, which also received an anime adaptation by J.C.Staff. Golden Time originally aired as part of the Autumn 2013 anime season, and having now watched Collection 1 on blu-ray, brought to the UK by Animatsu Entertainment, I sincerely regret not watching it as a simulcast.

Banri Tada suffered amnesia due to a fall from a bridge shortly after graduating from high school. This left him a year behind his peers, and at the start of Golden Time he is a new student at a Tokyo law school, lsot after the opening ceremony. In an attempt to make his way to freshman orientation, he follows two girls, but loses track of them and runs in to another confused freshman, Mitsuo. They quickly become friends, arriving at their destination just in time; the beautiful Kouko Kaga appears before them with a bouquet of roses, congratulates Mitsuo on getting into the scool and hits him in the face. She is revealed to be Mitsuo’s childhood friend, and they had promised to marry one day as children. Mitsuo took the entrance exam in secret to escape from the obsessive Kouko, but she used connections to find out and enroll herself. Waht would usually end up as a love triangle, here takes an alternate route; when Kouko finally accepts that her and Mitsuo are not to be, Banri confesses to her. Though, he also meets a second-year student, Linda, who was his best friend in high school, though he doesn’t remember this at first. As the story progresses, Banri has to deal with his re-emerging pre-accident memories, alongside feelings he once had for Linda, as they get in the way of his blooming relationship with the beautiful Kouko Kaga.

Golden Time, although at first seemingly just your average romantic comedy anime, but transposed from the usual high school setting to that of a university, quickly manages to impress. J.C.Staff have created a beautiful show that really pops on blu-ray, with fluid animation and character designs that can only be described as down to earth. The characters in Golden Time are perfectly cast, especially Yui Horie as Kouko Kaga, and Ai Kayano as Linda. They breathe life into the characters, and the lack of an English dub on this release will ensure that everyone gets to experience the characters as originally intended. Although there is a focus on drama throughout, the comedy within the show works well, the tea club’s antics being a notable example of gag comedy done right. Golden Time manages to strike a great balance between the drama and comedy, leaving neither behind as the story progresses. As a main character, Banri is refreshing in that rather than being the usual, bland, viewer-insert character that romance anime utilise all too often, he has his own personality.

Despite there being so very much to praise when it comes to Golden Time, there are a couple points that manage to disappoint, though not detracting much from the series as a whole. Both the opening track, “Golden Time” , and the ending track, “Sweet & Sweet Cherry”, both sung by Yui Horie manage to leave you wanting less; neither is outright bad, they’re just lacklustre, despite a solid performance by Yui Horie. The other issue that nags away at the back of the mind while watching is that the chastity seen throughout seems more indicative of a high school romance anime rather than one involving a bunch of university students. Even the amnesia sub-plot, which at first looks like it’s going to overpower the romance in the show and ruin the flow of the story, manages to remain restrained enough that, while still distracting and obviously unnecessary, it doesn’t really affect the show as a whole; events would likely unfold similarly even if the “ghost” of Banri’s past wasn’t there.

Sadly, when it comes to extras, Golden Time Collection 1 is just the usual creditless opening and ending theme, but with such unimpressive songs being used, this offering of extras is ever so slightly more disappointing than usual. Four trailers are also included; these are for Watamote, Dog & Scissors, Majestic Prince, and Listen to Me, Girls. I am Your Father!. Of these four titles, one has seen a UK release; MVM released Watamote on both blu-ray and DVD.

Golden Time is an excellent example of a romantic comedy anime done right, and I’m thankful Animatsu saw fit to grace the UK with a release, and on blu-ray at that. Having the story built upon a relationship, rather than the lead-in to confessing, is a refreshing change. Collection 1 is thoroughly enjoyable viewing that leaves you wanting more, even though the relationships within do seem fairly stable even before the end of episode 12. It is just a shame that the somewhat pointless amnesia sub-plot prevents Golden Time from being perfect, but it still comes close.

This title was reviewed using a blu-ray review copy provided by Animatsu Entertainment. 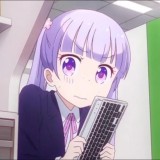 dull as the heart of an unbaked brioche@merrilymaralie·
30 Nov

one person followed me // automatically checked by http://fllwrs.com

Looking forward to this weekend.

Our pals at @lovesanimation have a touring season, coming to a Picturehouse and Showcase cinema near you! Tickets here: https://bit.ly/3m0vIOR
👻 Summer Ghost
🍿 Pompo the Cinephile
☁️ Over the Sky
✨ Looking for Magical Doremi

It's a shame that this will live in my On Hold list forever now all because @myanimelist have included the fourth (of four) video game novelisations in the light novel entry for Fullmetal Alchemist, and there is no English translation.